One of my clients had problems with partners. She seemed to attract domineering men with emotional baggage, and being a kind, helpful person, she soon became drained of positive energy. At the time of my consultation, she had been two years into one such challenging relationship. After ending it, she met another strong-minded guy who began to dominate her. In the meantime, her first relationship began again, so she had two powerful males directing her life.

Being a strong-minded person herself, it was a mystery to her why she was allowing these two men to take over her life. She couldn’t seem to help it.

She liked posters, and had two large ones in her bedroom of North American Indians in full headdress with colourful feathers and all the usual trimmings. Beautiful posters, but I found them troubling. After compass direction analysis, I discovered that they occupied North West of her home, which is the area for male energy and powerful people. Further, they were in a prominent position in her bedroom, dominating the room.

I advised her to remove the two posters. Reluctantly, she placed them on her kitchen cabinet doors, where they could hardly be seen amongst her kitchen paraphernalia.

Interestingly, North West is also the area for business and travel. Two months after moving the posters out, her company sent her to New York on business. There she met a gentle, non-domineering guy who later became her husband. He was, according to her, unbelievably normal and with no emotional baggage.

Because life patterns change so gradually in Feng Shui, people often forget that they had Feng Shui’d their home. Would it have happened anyway? Absolutely not, because it happens too many times to be a coincidence.

If you’d like to learn about feng shui, have a look at some of my feng shui courses. 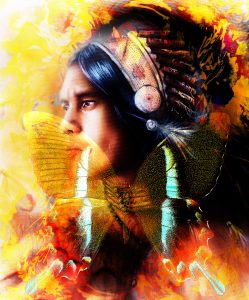